Went on a nice 13 km trail run with my sister-in-law Charlotte Clews (proprietor of Wild Open Heart Yoga). Ran up and over Schoodic Mountain and back to Franklin, ME. Finally the snow is gone most of the DownEast peaks, and normal crampon-free trail running can resume.
Charlotte’s photo was taken with her iPhone5.

If things work out, my family will be living on Peaks Island, ME this fall, in which case I’m really going to miss being able to run from my doorstep over five different mountain peaks. On the other hand, we’ll all be living together in one house, the White Mountains of New Hampshire won’t be more than 2 hours away (yeah), and the convenience of walking or running to work will be pretty sweet. 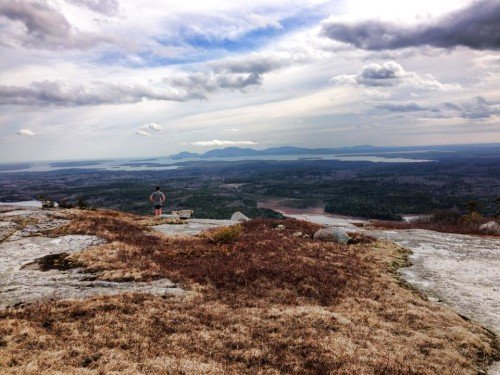 Next day, took my kids for a quick hike up Tunk Mountain on a gorgeous blue-sky day. Still chilly on top, but from the vantage point below, you can see Catherine, Caribou, Black and Schoodic Mountain. Click on either image for a larger version.

This house, just down the hill from me in Franklin, Maine, is slowly being reclaimed. The roof has been breached, plaster is falling off the lathe inside, and the granite slabs making up the foundation have fallen in on one side. A good reminder of our own impermanence. 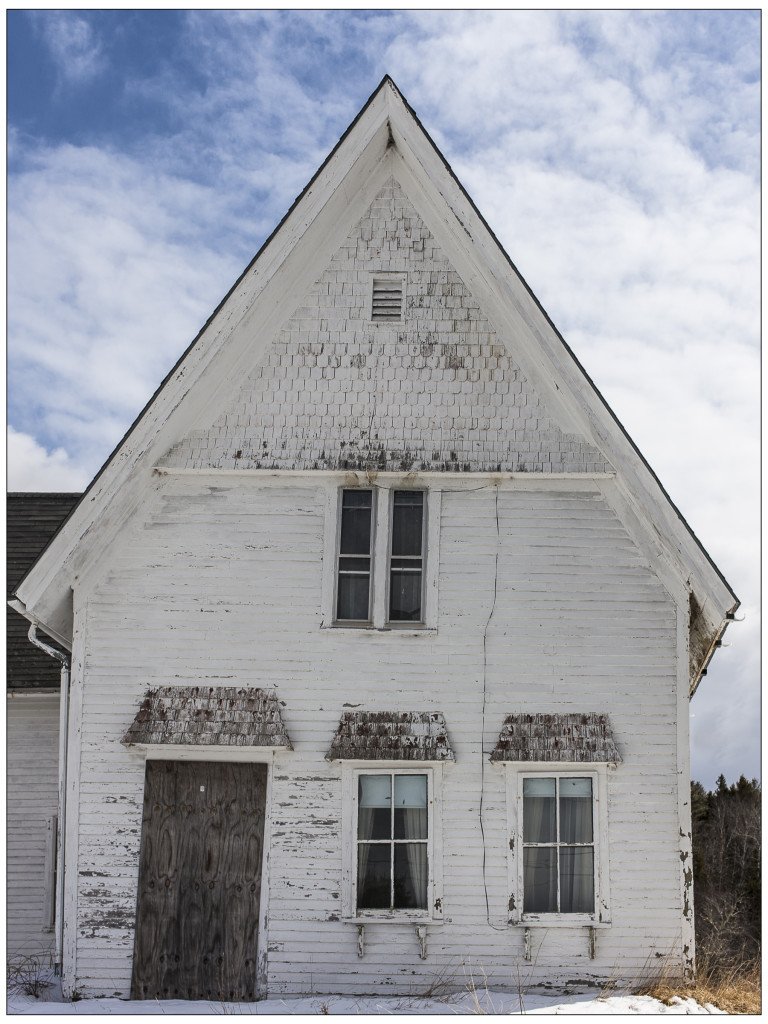 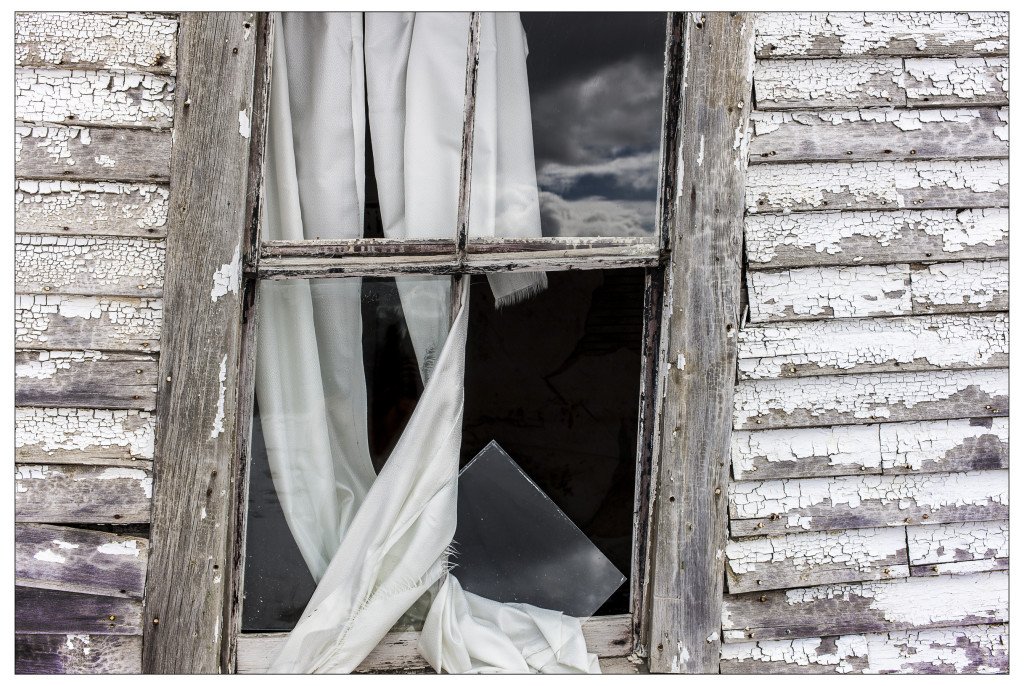 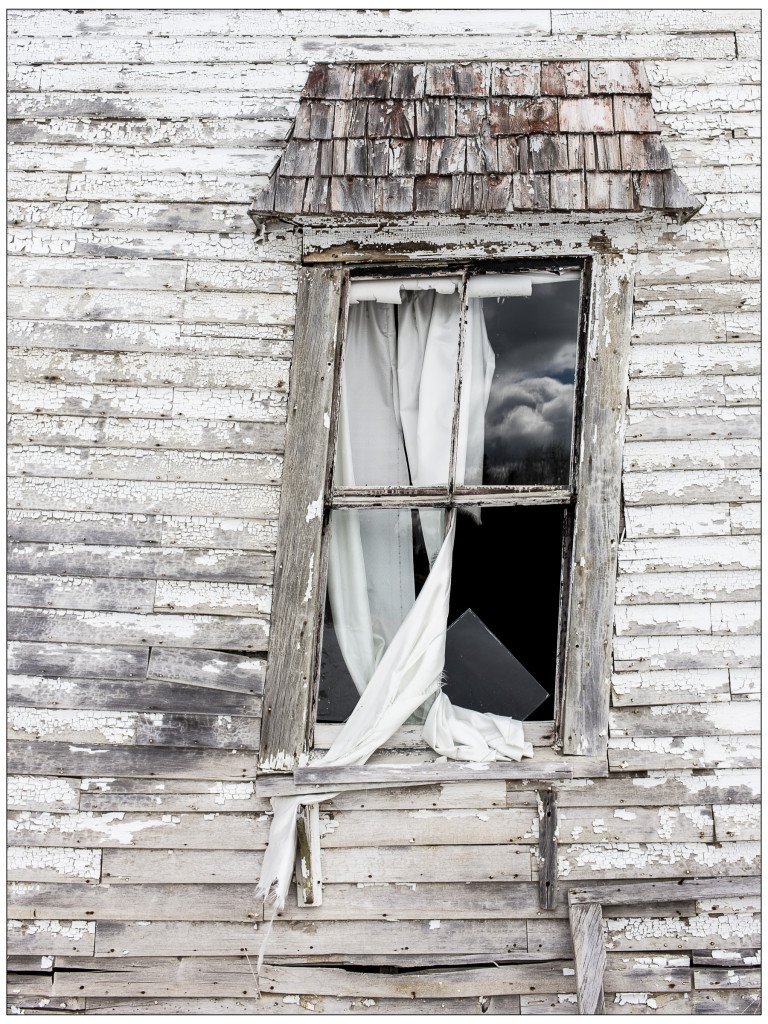 A blustery March day just before the March 19 Snowstorm. Just as I was getting psyched to see the mountains open up to running, winter returns. Now another week of wet slush and mud to follow.
(1/100 Sec, 40mm f/11, ISO 100) 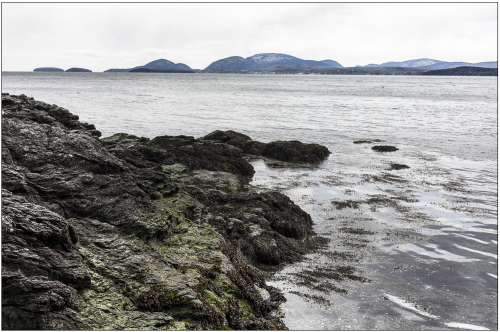 My family is beginning to search for a house on Peaks Island, ME so we can all be in one place, and I will be able to stop the insane amount of “commuting” I have been doing between DownEast Maine and Portland, being away from home for 4 days per week. Here are two snapshots in the evening before taking the ferry back to Portland after looking at a potential house.

In the image below, the posts are illuminated by the dock light (iso 1600, click on the image for a larger version) 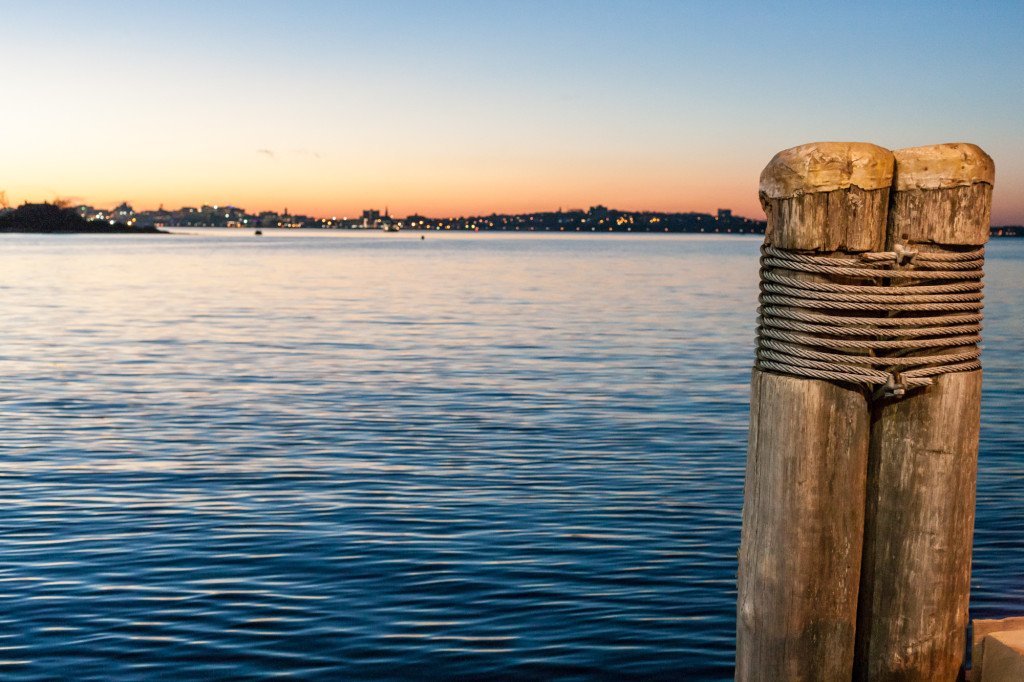 And eventually, the ferry arrives (iso 1600); I just love the late evening and dock light combination in these two images. 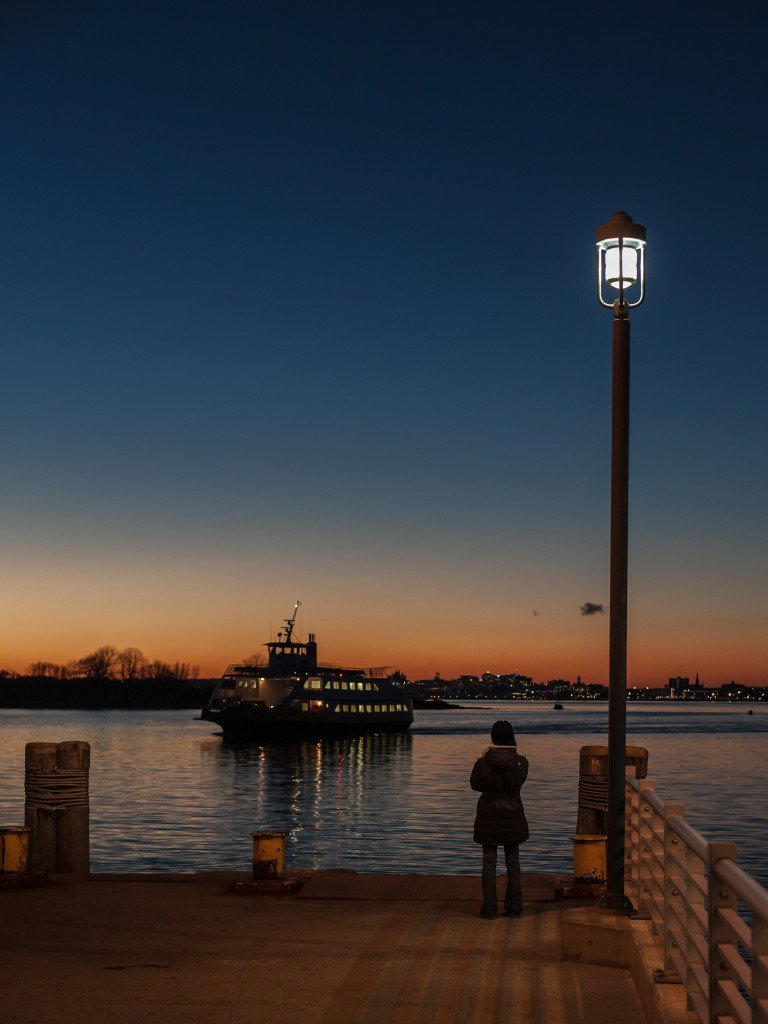 Waiting for the Ferry, Peaks Island, ME

As the last house didn’t pan out, the search continues. Meanwhile, I’m concertedly rehabbing some posterior tibial tendonitis and ankle pain that has totally stopped my trail running for 3 weeks now. But, I’m now regaining my normal flexibility, and am able to walk almost normally, so I am hopeful to be up running by the end of the week if things keep progressing along. 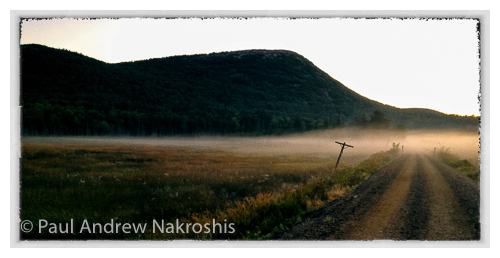 The relative dearth of photos recently is a result of having become somewhat obsessed with trail running. I’ve never been a runner, but have done my share of distance touring, hiking, and swimming. Having decided that I don’t feel so safe bicycling on roads with swerving cell phone texting drivers, and because it takes at least 30 minutes to get to the nearest pool to swim, I decided to start running back in May 2012.

I don’t really like running on roads, but I absolutely love being in the mountains, so trail running was a natural for me. Mind you, I have never really run before aside one a very brief stint in graduate school when I ran for a few months. I say it was a “natural” but certainly not an easy progression to covering any significant distance without stopping. At first, I couldn’t even run up the first small hill (100 m) that starts 1 km from my house, and had to walk sections of a small 4 km loop. I would get totally out of breath and had to run and walk to complete the loop.

But, interestingly, once I let go of the judgement that walking was bad, it only took me about 5 tries till I could run the whole loop. Then I gradually began increasing distance, until an unfortunate night run when a previously rolled ankle decided to let me know that it had enough. It took 6 weeks of downtime when all I could do is cycle and swim to keep up the aerobic base. But come August, I’ve been able to run again, the longest run being a 20km run over on Mount Desert Island. Took me 3 hours and 4 gels, but it was a lot of fun.

I live in Franklin, Maine, in DownEast Maine, just bordering on the hopping town T10SD (which means Township 10 Southern Division, for those of you not familiar with this highly underpopulated part of Maine). There are five 300+ meter peaks in my backyard, and I’ve been working up to running all 5 in one go. I often go out on a run up Schoodic Mountain (that’s the peak in the above photograph)
or along the Sunrise Trail, and at this point, I’ve run the whole network of trails over all five peaks, and I’m ready to try a single end to end run that ends at my house.

What does this have to do with photography? Well, I still want to photograph, and since I run in places I normally would hike to in order to make images, I naturally want a camera that I can run with. My full-frame dslr is WAY too heavy to comfortably carrying while running, and I’m very interested in seeing what I can carry that still has outstanding image quality. The iPhone4s has a reasonable P&S camera, but it just doesn’t have the dynamic range and image quality that I wish it would. So, what camera would be easy to carry, yet have outstanding image quality?

So far, I have a few candidates, an Olympus Pen (the newer one with the OM-D Sony Sensor), Fuji XPro-1 (or wait for the XPRO 2?), or …well, I’m not sure what other cameras I should consider. Are there any trail runners out there with good suggestions?

I see two problems with this scheme. First, I’m already forgoing a tripod—something I’d never do with my dslr, and second, carrying anything goes against the whole minimalist simplicity I love about running. So, I’m somewhat puzzled, and cannot seem to come to any resolution, and I just keep running with my iPhone. 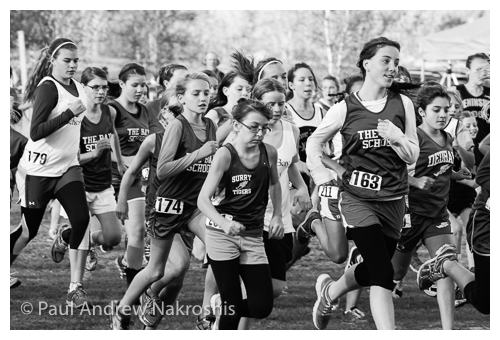 On October 11, 2012, 12 schools met at the Airline Community School in Aurora, ME for the Small Schools Cross Country Championships. The course was about 1.9 miles, and the winning times were at roughly 12 -13 minutes.

You can see more photos (only from the girls race; sorry boys!) at this link. 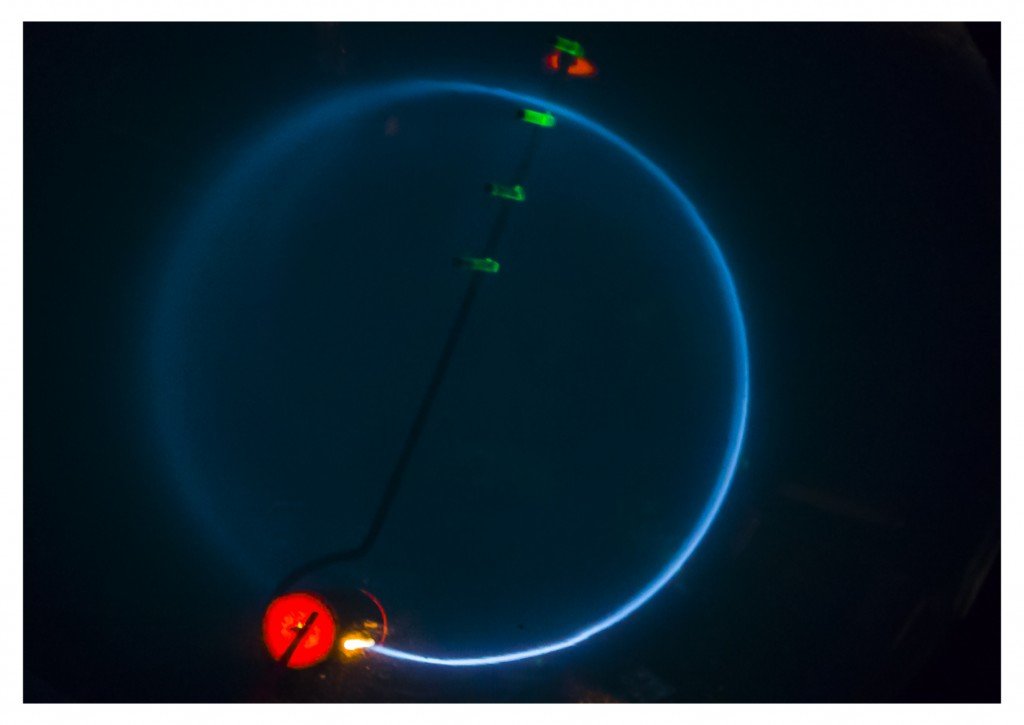 This image is a photograph of an electron beam passing through low pressure mercury gas in a classic laboratory experiment performed by the physics majors at the University of Southern Maine. The electrons in the electron beam excite electrons in the Mercury atoms to higher energy levels (actually the beam is also likely ionizing most of the atoms, but I haven’t sat down to calculate whether this is in fact true), and then, as the mercury electrons cascade down to the ground state, they emit characteristic wavelengths of light, one of the brightest being the blue light at 435.835 nm that you see here. Those of you that have completed two semesters of physics should know why the beam is moving in a circle. The orange-red cylinder at the bottom left encloses a hot filiment from which the electrons are emitted.

All technicality aside, I really posted this image because I like what I see as its minimalist geometric design.

And knowing that I am looking at visual evidence of the passage of subatomic particles traversing a uniform magnetic field created by helmholtz coils only adds to my appreciation of the image, it doesn’t subtract from it. 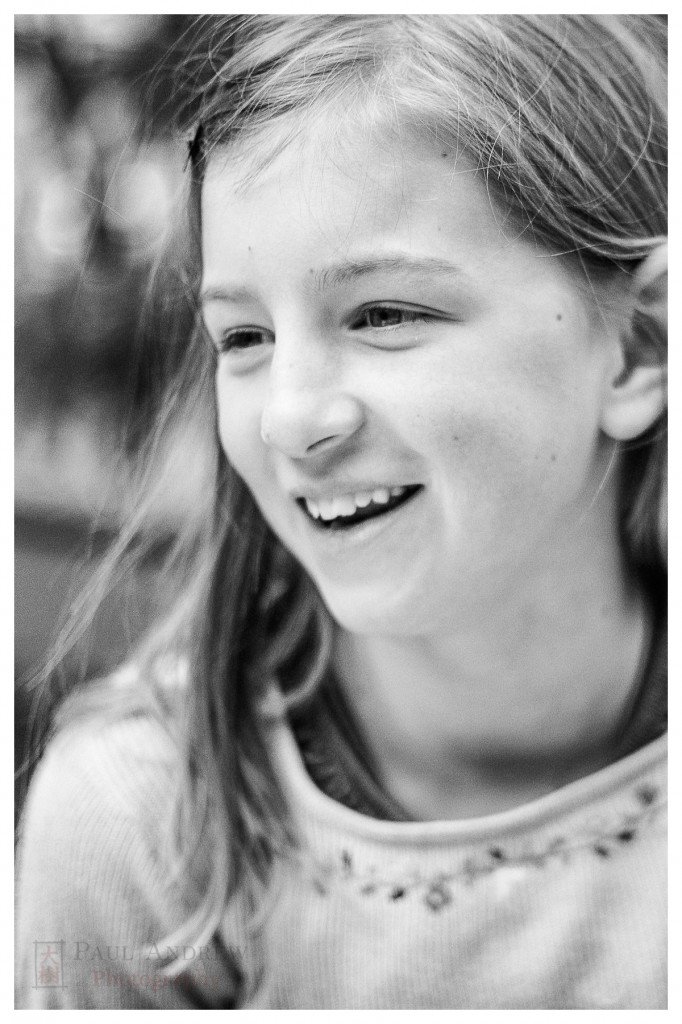 I like this portrait of my oldest daughter, but I’m too biased to tell if my judgement is sound. In any case, the photons reflecting off her face passed through the venerable 50mm f/1.4 lens.
Tweet 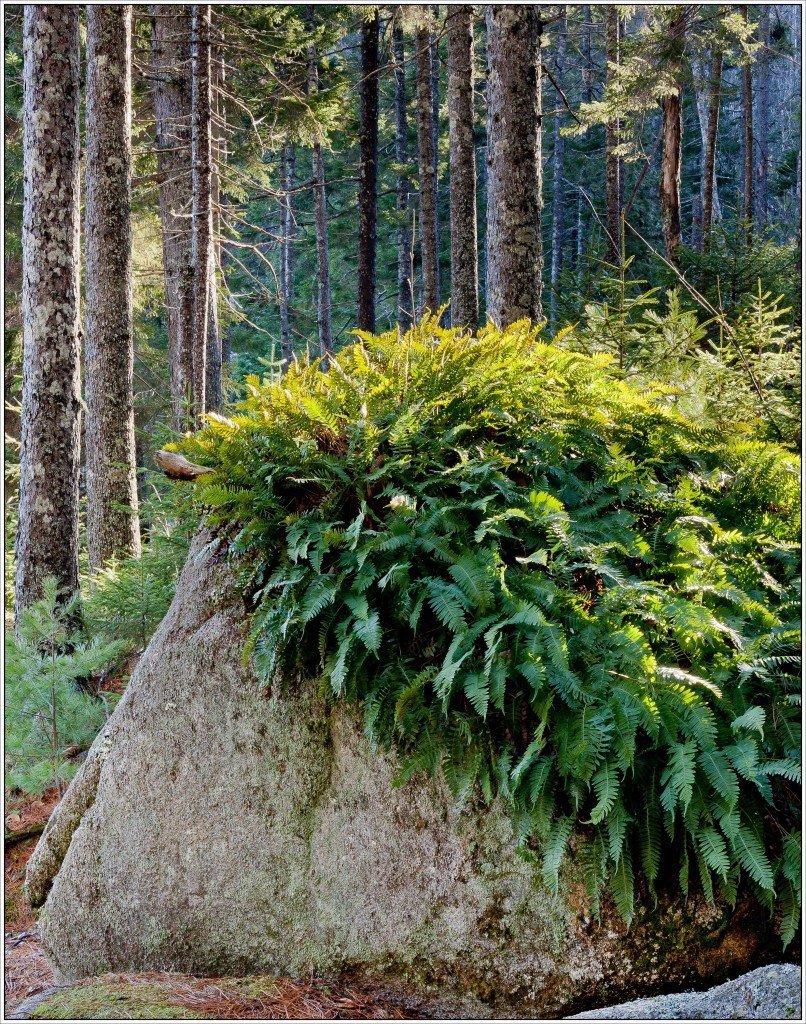 It’s been an unusually warm fall and winter in Maine, as evidenced by above freezing temperatures on January 1, 2012 when I went on a short 7.5km hike (round trip) with my 6 and 10 year old daughters. We hiked up Tunk Mountain, which has a fabulous view of the surrounding terrain. Tunk Mountain is just outside Franklin, ME, but is in T10 SD (I think that’s Maine speak for Township 10 South Division). There are few enough people living here that it’s apparently not worth forming a proper town.

Click on the image for a full size view. 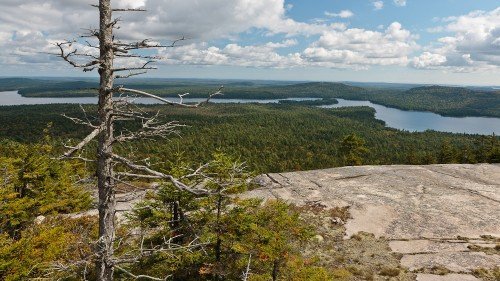 Tunk Lake, ME from slope of Black Mountain

It’s been a long time since I’ve posted due to having moved the family and set up a new house, but I’ve still managed to shoot a fair amount—however, blogging has taken a bit of a back seat. I’m starting to get caught up with work and now that we’re all just about settled in, and I hope to post more regularly.

So, in the spirit of getting started again, here’s an image from my new favorite hike in downeast Maine—Black Mountain. Most people that hike in the area (just north of Ellsworth) go to Schoodic Mountain, and I’ve hiked it many times. But, it’s a little disappointing to have radio towers on the summit. Black Mountain doesn’t have this problem, and I rarely see many people hiking on in. It has an extended region with sweeping views extending from Mount Desert Island to the mountains of Western Maine. The photograph above is from an overlook toward Tunk Lake, and the photograph below, of the granite close to the summit of Black Mountain. 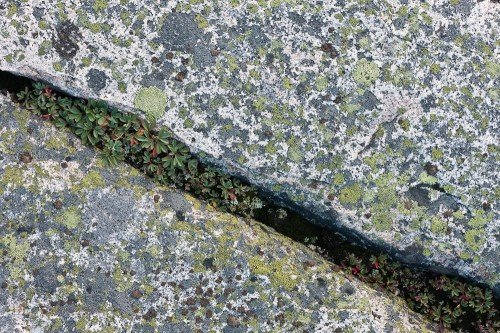 Granite and Lichens, Black Mountain, ME